My Name is Ben Green,...and this is "Where I've BEN!"
Do you remember and still participate in Black Solidarity Day(BSD)? I do. Just in case you forgot or never heard of  BSD, please review:

And BSD is more 50 years old...it continues to mean a lot to the Black Community!

The first Monday in November has been sacred to me as a young black child growing up in the 60's and 70's. Its awareness became less and less pronounced and announced in many communities and families, but I remembered. Then on various Social Networks I see this - NATIONAL BLACKOUT DAY 2020 aka #BLACKOUTDAY2020!!! 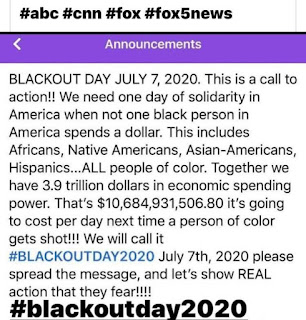 Hold up wait a minute!...Wuh? Wha? Who? How?, did I miss the email? Text? Phone Call?
What caught my eye first was the Media HashTags!!!  It looks good, appears to be a good thing, and then I actually read it, and my INTELLIGENCE really kicked in. Wait- - Why does this sound like, "Black Solidarity Day" with a twist. Don't get me wrong, the concept is not new but in this day of getting Communities to come together for a "GOOD" cause put this #blackoutday2020 on Skid marks and I don't mean the ones in your underwear!
First it says, "This is a call to action!!" - O.K. , what's the action? DO NOT SPEND A DOLLAR (if you're a Black Person)!!!  So this is when my stupidity kicked in and asked, "So is spending more than $1 acceptable? Ya know, like $3.50? $5.00???. Then you extended the offer outside of the Black People (Calling for Action!!) and included Africans, Native Americans, Asian-Americans, Hispanics...(ALL people of color.)  So now is it #MeltingPotBlackOutDay2020? or MultiCulturalBlackOutDay2020? Where did you get your data from?  By not spending $1 Dollar,  It's going to cost WHO? $10,684,931,506.80 - To the Penny! REALLY?!!!! The next time a person of color gets shot!...Have you been in 'Da Hood?
How do we cash that in ??? It's interesting you chose July 7th, 2020 and not the July 4th weekend(When most Americans spend their $$$$$$$$$$), and July 7, 2020 falls on a Tuesday. Then you end your "CALL TO ACTION" by encouraging us that this will show, "REAL action that they fear". Who are we trying to put FEAR into by not spending $1 dollar and uniting???
Here's the B.I.G. question...,"WHO is behind this movement?"  Not - ABC, CNN, FOX, FOX5NEWS, nor MSNBC, CBS, NBC, WWOR, WPIX.  The fact that the latter were left out and not one but two of FOX's Media were listed...Hmmmmmmmm. If I was born yesterday, this wouldn't bother me but in this age of TRUMPISMS, RUSSIANISMS, some (not all) peole want to turn America back into - - - into - - Well,  you know where I'm going - and I am not even slipping into that Historical Darkness!
So I put my college education into use and did some research, I mean CoVid Life as an Educator allows my brain to focus on what's REAL and what's FAKE?? The smelled like 3-Day old diapers sitting in the Kitchen garbage pail....yep, SCHTINKY!!
Just like BSD, #BLACKOUTDAY has a history. "Blackout Day launched on March 6, 2015, and after December 21, 2015, is scheduled to be held on the sixth day of every third month, starting with March 6, 2016.[1] " Hmmm, and yet it's just hitting the social nets more in 2020! "The event was conceived in early February 2015 by Tumblr user T’von Green.[2] Green noticed that there was a lack of black representation on social media, specifically on Tumblr." Since then T'von Green (No relation to me!!!) has since become - GHOST! [https://en.wikipedia.org/wiki/Blackout_Day].
Someone else picked up the Baton! Believe it (or Not!) his name is - Calvin Martyr.... CALVIN MARTYR!!! What? You don't recognize this name either?
Check his bolistics:

What gives me the Screw face:

*He never says his Name though he has Media with his name on it.

BTW- when Qurantine time hit the US, THAT stopped and cost the nation. At this time in the World, what business (Multicultural) can truly afford to NOT make any more money coming out of the July 4th weekend???? Why not during Christmas? NYE?

I  will keep a side-eye to this and pray it's a movement and not a RE-movement.

Posted by AnotherBenG at 8:13 PM

Email ThisBlogThis!Share to TwitterShare to FacebookShare to Pinterest
Labels: AnotherBenG